A number of UK e-bike retailers are suffering supply problems with stocks having been diverted from Felixstowe as a result of the HGV driver shortage. The issue is also being compounded by significantly increased demand for e-bikes since the first lockdown and a worldwide shortage of components. 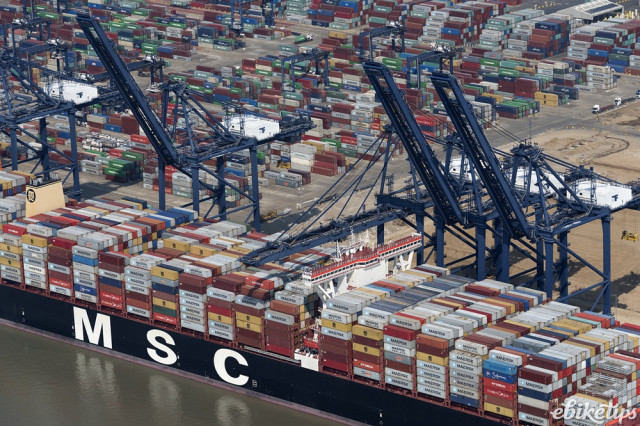 The MSC Tina at Felixstowe docks.jpg, by John Fielding via Flickr

The Port of Felixstowe handles 36 per cent of the UK's freight container traffic but has recently seen ships rerouted to other European ports due to a logjam of shipping containers.

Speaking to the Metro, the managing director of E-Bikes Direct, Matt Flanagan, said: “There is a perfect storm at the moment, with delays all over the world going right the way through the supply chain.

“We are affected by component supply shortages, by the space on the ships for the containers and the delays at Felixstowe, with goods having to go back to Rotterdam because they’ve been turned away at the port.

“Then there’s the major delays in getting haulage drivers to bring us the containers when the ships actually do dock.”

Flanagan said his firm has been experiencing issues in this area above and beyond those faced by many other retailers.

“The wait for a driver can take up to two weeks at the moment and while it’s stuck on the dock it’s us that’s paying for the storage.

“What makes it even more tricky is that because of the batteries the e-bikes are considered dangerous goods and the driver needs to have taken an awareness course, which reduces the pool of drivers even further.

“The shipping time used to take about five weeks but it’s three months from the factory to our warehouse at the moment.”

Flanagan said E-Bikes Direct still had plenty of stock and buys from the UK as well, but that the situation was nevertheless proving a major strain on cash flow.

“We are paying for product we are not getting for three months, with other containers leaving or on the water at the moment.

“If we were a smaller company it could potentially have had very negative effects for the future of the business.”

E-Bikes Direct currently has three containers at sea, holding around 750 bikes worth £500,000.

Flanagan said he was unsurprised there hadn’t been widespread take-up of the government’s offer of temporary visas for European HGV drivers.

“They only have a three-month window,” he pointed out. “How would they even find accommodation in that time? There’s no real carrot for them to come to the UK.”

Martin Cairns of E-Bike Capital said that the various supply chain issues have resulted in a fundamental change in how e-bike retailers are operating.

“Those of us who pre-ordered a high volume of e-bikes rather than the regular volume are getting around 50% of what they requested and taking what bikes are available, not necessarily what was ordered,” he said.

“There are many bike shops that did not pre-order and would just buy from supplier stock. They will have virtually nothing as that pre-Covid buying practice is simply not available now.”

Commenting on the delays at Felixstowe, a Department for Transport spokesperson said: “Global capacity at ports regularly fluctuates in response to increased seasonal demand and this has been exacerbated by the ongoing global container and HGV driver shortages.

“All ports across the UK remain open to shipping lines with Felixstowe reporting improved capacity over the past few days and the government continues to work closely with the freight industry to tackle the challenges faced by some ports this autumn.”

From Monday 1st November 2021 our winter hours will be: